What is romantic in our times? Mossy atriums and falling flowers? Villas? The great scenarios?...

We depart on this sentimental voyage from Vicenza's ancient heart. The eye follows the spirals of the river, crosses ancient bridges, pauses on the palazzetti with their precious artistic inserts: this is the rione Barche where at one time the barges moored, as they headed from the sea and lagoons along the Bachiglione river. We rediscover the echo of the Venice of the merchants in the flowery gothic of the windows and front doors, in the porticoes and galleries which once were stores, and in the shadowy vaults from which genuine voices still emerge.

San Valentino (Saint Valentine)
Then we leave the village, where stands the Basilica dei Santi Felice e Fortunato. Here, since 1922, a relic of Saint Valentine, patron of those in love, has been honoured with a nice feast. To tell the truth, the tradition of the Feast of S. Valentine in Vicenza as been repeated for 500 years and was transferred to the Basilica of Saints Felice and Fortunato following the deconsecration of the church of S.Valentine - we can appreciate this church's façade at No. 54 of Corso San Felice (now occupied by Lanaro Arredamenti).
Over 1,730 years have passed since that 14th of February, the day of his death, and the cult of San Valentine, the healer bishop of Terni, is still alive. He was born in 170 AD and died on the scaffold, at almost one hundred years of age, in 269. Venerated throughout the world as the saint of peace and love, proclaimed by the people as the protector of lovers, he is highly popular all over the world, from Japan to the United States, to Britain and even in Australia. Furthermore, the English Anglicans and the Protestants of the United States were the first to proclaim him protector of lovers, and in countries where the anniversary of 14th February, made official in the last century, is particularly felt. 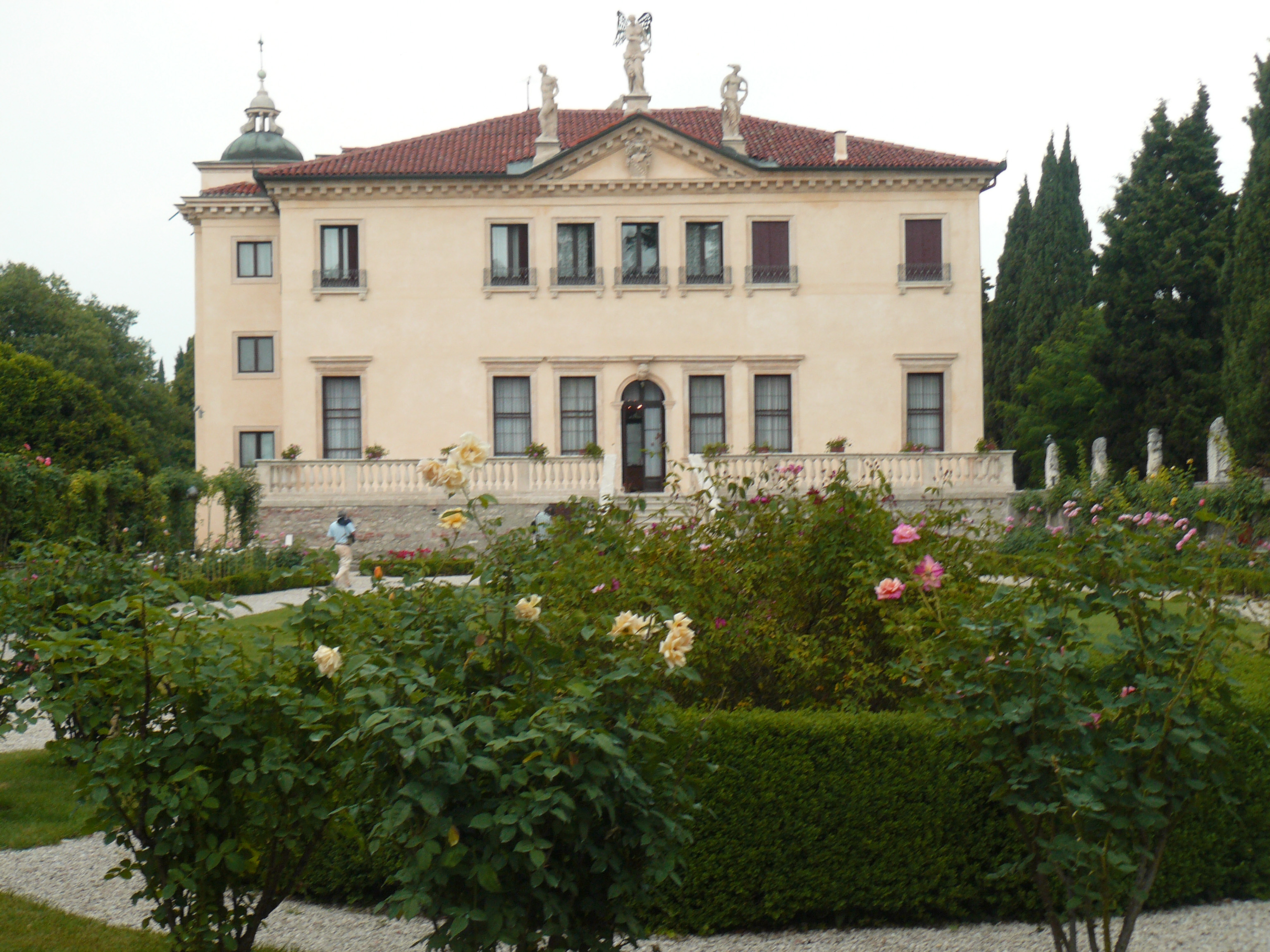 Villa Valmarana ai nani - the story of Lajana
Here the dwarfs, turned to stone by sorrow, keep a watch. As legend has it, they were the custodians of a young girl, herself deformed. The choice of the dwarfs was a pitiful expedient to make her believe that she was a beauty in a beautiful court, but all in vain. One day, as she looked out of the window, she saw a splendid cavalier pass by, and was awe-struck by him. But she immediately became aware of her deformity and committed suicide in despair. Her faithful servants, turned to stone, through the sorrow for the death of the young girl, and today receive visitors high above from the walls of the Villa Valmarana.As we proceed toward the rotunda, we reach the Valletta del Silenzio much loved by Fogazzaro and still the destination of moonlit walks, whereas, if we go up toward the Sanctuary of Monte Berico we follow the gentle undulations of the Berici hills where lovers go - now in modern cars - in search of silence and solitude.

The castles of Romeo and Juliet
This is not Shakespeare's Verona, but the village of Montecchio, and the pen of Luigi da Porto, who was a fore-runner in recounting a story we do not know where it took place, if it ever happened at all. However, the two manors which watch each other from the top of opposing hills, invite us to believe that the inspiration for the story of the unlucky young lovers came from here and that another Vicenza monument, Villa da Porto di Montorso, the property of the writer's family, had 'baptised' the work. According to popular belief, Da Porto used to take refuge in the house of Borin the farmer, where these words were written on a tile in the corner room of the first floor: Luigi da Porto wrote the Romeo and Juliet story in this room.

Orgiano and the real story of "The Betrothed"
This is the place, in the lower Vicenza area, which is the background to the trial of a young noble from the province, arrogant and violent, backed by a gang, which, together with the cousin lie in wait for the local young women, tormenting them and finally raping them. The documents of the trial of this Paolo Orgiano, suggests some surprising analogies with Manzoni's story, to the point where the documents could be considered as that "faded manuscript" which Manzoni himself indicated as his source. In fact, the novelist was extremely interested in the trial deeds, to which he often refers, and not only in the Betrothed.

The contention for the beautiful Lionora of Marostica
Our romantic itinerary moves toward the north and reaches Marostica, known across the world for the famous Chess match whereby the two young men, Vieri of Vallonara and Rinaldo of Angarano, challenged each other for the love and hand of the beautiful Lionora, daughter of the Veneto Podestà of that period, Taddeo Parisio (1454).
From 1954, five hundred years after the first challenge, this match, using live chess pieces, involves about 400 participants: almost the entire population of Marostica. 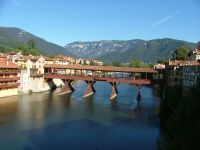 ...and lastly... On Bassano Bridge, there shall we hold hands and exchange a kiss of love
We conclude the itinerary on the celebrated wooden bridge by Palladio and of the Alpini soldiers, which, for almost 500 years, has gathered the secrets of lovers who, as the well known song says, exchange a kiss and a handkerchief here, as a pledge of love.

ALONTE - In Corlanzone, S.Valentine is feasted with a three day festival around 14th February.

BREGANZE - In Mirabella there is a church dedicated to the saint, where a Mass is generally celebrated on 14th February. There is a feasting committee which has for many years organised three days of spectacles/shows.

BRENDOLA - There is a Capital dedicated to S. Valentine situated in the via and Contrada of the same name. A Mass is usually celebrated on 14th February. Since 1629 Brendola has feasted the patron saint of lovers. Three days of spectacles/shows are normally organised.

CALVENE - In Prà del Giglio there is a small church dedicated to the Saint.

CAMPIGLIA - In the ancient Parish church of St.Peter (XIII sec.), near Villa Bressan, there is a chapel dedicated to the Saint.

CASTELGOMBERTO - There is a church dedicate to St.Valentine which belongs t the Municipality. It is in good order, and was recently renovated by volunteers of the local Alpini Association. On S. Valentine's day it is normally opened to celebrate Mass.

COSTABISSARA - There is a church dedicated to St. Valentine where Mass is usually celebrated, with the blessing of bread, then distributed to the children who are present.

CRESPADORO - In the Marana hamlet, contrada of the Cortesani, there is an Oratory dating from1776 dedicated to the Saint, well restored an full of frescos, containing a statue of S. Valentine. On 14th February, a festival is traditionally organised and Holy Mass is celebrated.

GAMBUGLIANO - A dinner for couples, including those from outside the town, is organised in the Parish church on S. Valentine's day.

MONTECCHIO - Near the centre of town, there is a church dedicated to St. Valentine which belongs to the Municipality. Here the veneration of the Saint is felt deeply. Moreover, there is a Committee for the Festival of S. Valentine, which for many years has organised an operatic concert in the Parish church of S. Pietro in Montecchio Maggiore.

NOGAROLE - There is an altar piece dedicated to S. Valentine, dating back to about 1400, in the church of Saints Simon and Judas which depicts a mother who hands her epileptic daughter to the Saint.

PONTE DI BARBARANO - In via Crispi, near to Villa Rigon, there is a church dedicated to the Saint where his relics are preserved.

POZZOLEONE - S. Valentine is the patron saint of Pozzoleone. The traditional agricultural fair, now numbering over 250 editions, takes its name from the Saint. There is an old church dedicated to the Saint in via S. Valentine.

ROMANO D'EZZELINO - Regularly organises for 14th February, the 7 or 9 kilometre country Walk of S. Valentine among the Ezzelian hills and vales.

THIENE - In Via S. Gaetano there is a small nobility church. It is always open and can be visited. It houses an altar dedicated to S. Valentine, soldier and martyr.

VALLI DEL PASUBIO - In the Savena quarter, in the small Church of S. Carlo (seats 20) which is opened only on 14th February, when a Holy Mass is also celebrated.

VICENZA - In the city, the traditional feast of S. Valentino has been repeated for about 500 years. The event is held in the Church of Saints Felice and Fortunato i.e. since the Saint's relics and Maganza's painting of the Saint were brought here following the deconsecration of the church dedicated to him.