GOTHIC in Vicenza developed in a very significant manner, and was first of all marked by the enlargement of the city itself, through the addition of fortified walls at the time of the domination by the Carraresi (1266-1311) and, later on, by the Scaligeri (1311-1387) followed from 1404 by the Venetian Republic.True masterpieces of gothic architecture - both civil and religious buildings - were erected as part of this renewed urban dimension. 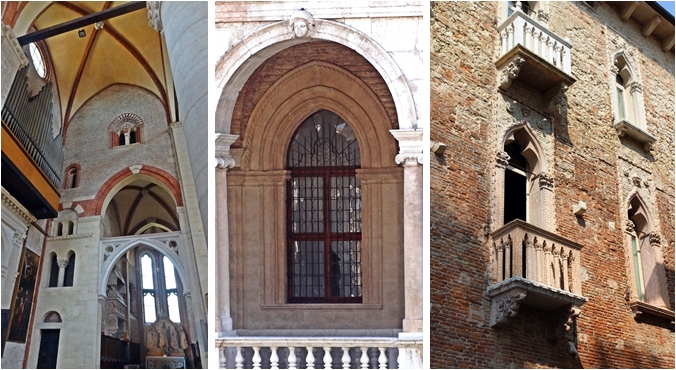 The Palazzo della Ragione was built in gothic style in the XV century in the heart of the old town, in the ancient zone of the Roman Forum and on the foundations of the Palazzo Comunale (Town hall). It was planned by Domenico da Venezia, and re-echoed the Palazzo Ducale in Venice.

In earlier times, but as ever linked to the success of Gothic in the city, the Dominican, Franciscan and Eremitic Friars erected some splendid buildings at the end of the XIII century: respectively The Temple of S. Corona in the east, an exceptional interpretation of Cistercian Gothic; the Church of S. Lorenzo, in the north, a blend of Romanesque and Gothic; the Church of S. Michele in the south, demolished in 1812. In 1323, the Augustinian erected the Badia di S. Agostino (an abbey) in the valley under the Berici hills. It was funded by the Scaligeri and by the noblemen of Vicenza and Verona. 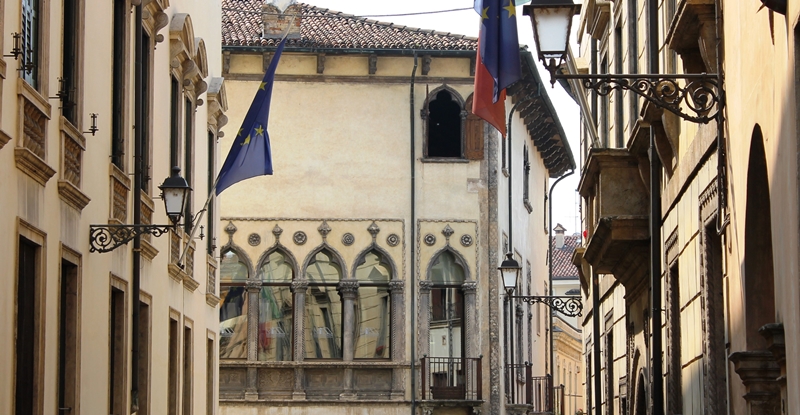 The late Gothic complex of Monte Berico (1428-1467) was built just outside the walls. It now stands beside the celebrated Baroque Sanctuary. Precious gothic paintings, sculptures and goldsmithery articles can be found inside these churches: in Santa Corona, founded by Beato Bartolomeo da Breganze in 1260, we find the Arc of Marco Thiene, with the fresco by Michelino da Besozzo (active from 1388 to 1450) and also Madonna con il Bambino, Santi e Offerente, further the painting Madonna delle Stelle, produced by Giovanni da Bologna in the second half of the XIV century; there is also the famous reliquary of the Sacra Spina, a context of precious stones with fragments of the Cross and Crown of Thorns, donated by the Louis IX King of France to Beato Bartolomeo da Breganze, Bishop of Vicenza from 1265 to 1270. The interesting marriage between painting and sculpture is at the root of other gothic creations: the Stone altar piece of Vicenza, by Antonino da Venezia, depicting the Madonna with Infant Jesus between Saints Peter and Paul, in S. Lorenzo; another painted and gilded stone altar piece, by the same artist, is housed in the Cathedral, a large XV century building reconstructed following bombing in 1944-1945.Another work by Da Venezia, originally in the Church of S. Peter, can be found exhibited with other works of the period, in the Civic Museum of Palazzo Chiericati. 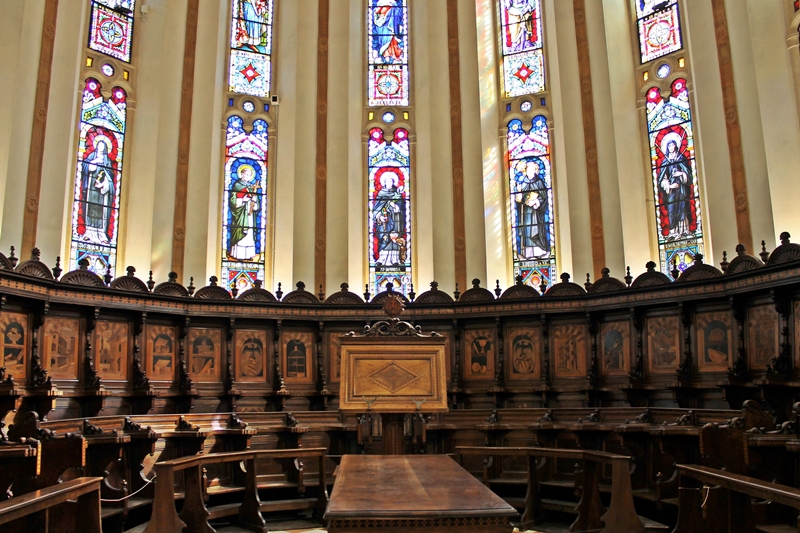 The following are preserved in the S. Agostino Abbey: a Polyptych by Battista da Vicenza, with its cursive narration in miniature style; a wooden Crucifix by Antonino da Venezia; a precious cycle of frescos, in the Presbytery, depicting Stories of the Virgin and Evangelists. Another stopping point is the Church of S.Maria delle Grazie, where one can admire an interesting Madonna con Infant Jesus, a sculpture by and anonymous artist working in Venice in the thirties of the XV century.
This elegance leaves its mark in many Gothic Palazzi, erected in Vicenza, especially in the XV Century, to celebrate the dominion of the Venetian Republic, which led to a marked economic recovery in addition to fruitful cultural contacts.
Some exceptional stone and marble cornices, as well as sculpted and decorate windows and portals, proudly show their refined decorative repertoires.It is convenient for visitors to visit the gothic buildings, by sub-dividing them into two distinct itineraries:
- the first covers the zone to the right of the main street axis, Corso Andrea Palladio, with the Ponte degli Angeli behind you;
- the second is on the left. Starting from the first itinerary, the route could start from the Boccalotti Oratory, in Piazza S. Pietro, proceeding to Palazzo Regaù and crossing into Via XX Settembre.
From there, after a stop in the Tempio di S. Corona, we proceed toward Palazzo Dal Toso Franceschini Da Schio, known as Cà d'Oro, embellished by the finely sculpted splendid arched lintel of the portal.
As we proceed to Contrà Giacomo Zanella, we note the magnificent Palazzo Sesso Zen and from there we head for Contrà Porti, where the interpretation of Venetian Gothic reaches its high points in Palazzi Porto-Bertolini, Porto-Colleoni and Porto-Breganze.
As we go along Corso Palladio, we are greeted by the view of Palazzo Braschi-Brunello with the medallions sculpted with virile profiles, and Palazzo Thiene.
We can finish this itinerary by visiting the Church of S. Lorenzo in the piazza bearing that name. 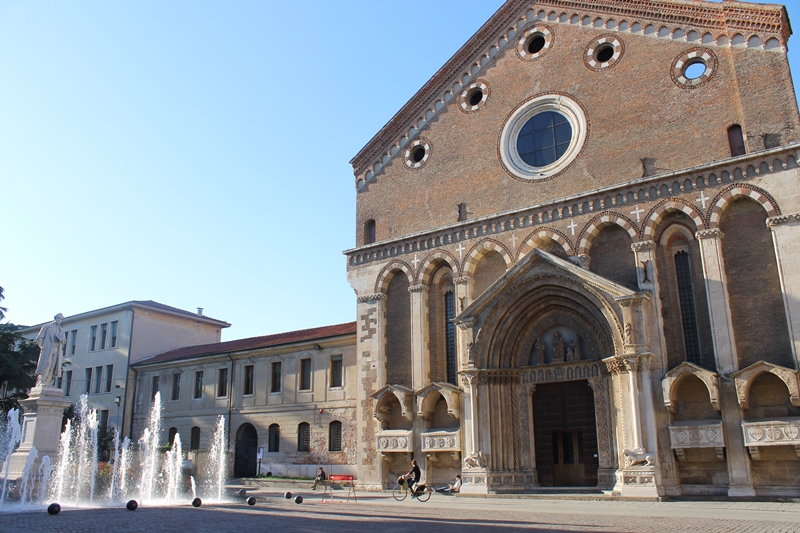 There is a strong concentration of gothic buildings in the Barche zone, starting from Ospedale di S. Valentino, between vicolo Retrone and Contrà delle Barche. In Contrà Piancoli, Casa Scroffa Polazzo stands out, and nearby we find, close to the panoramic S.Michele bridge, Palazzo Garzadori Braga. We proceed in the quest of the legendary Casa Pigafetta, in the street of the same name, and go on toward Contrà Paolo Lioy, to enjoy the view of the elegant prospect of Palazzo Garzadori Fattore. In nearby Contrà SS Apostoli we note the interesting façade of Palazzo San Giovanni and of Palazzo Squarzi Serini, concluding our pleasant walk with Palazzo Arnaldi Segala in Contrà Pasini. 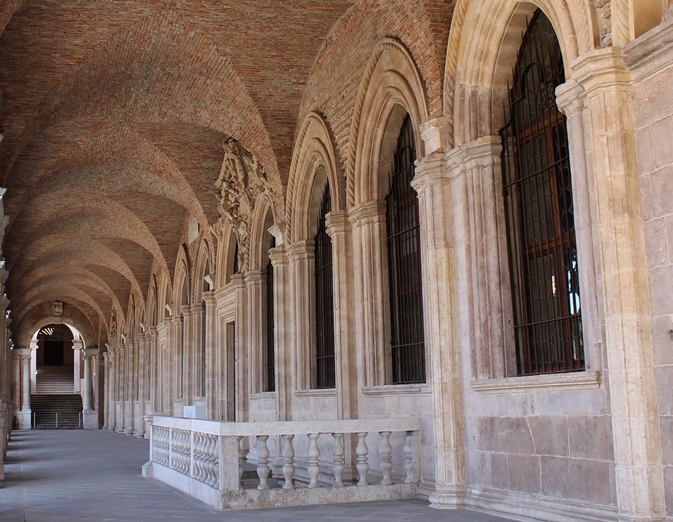 Equally important gothic works can be found in the Province. The following are housed in the Museo Biblioteca Archivio museum in BASSANO DEL GRAPPA: a wooden crucifix by Guariento, signed, and probably dating after 1332; a 'torn' fresco painted by Battista da Vicenza, showing The mystic wedding of S. Caterina; fragments of the Crucifixion; a precious panel with Madonna with Infant Jesus by Michele Giambono.

In BREGANZE at the Casa Mater Amabilis, which originally belonged to Naimerio da Breganze, son in law of Ezzelino da Romano III, we can examine an interesting Frieze with vegetal motifs, puttos and zoomorphic subjects, from the V-VI decades of the XV century.

In NANTO, in the Presbytery of the church of S. Maria, an anonymous fresco painter in the Michelinian sphere, painted the fresco depicting the Announcement to the Shepherds and the Saint.

THIENE has some excellent surprises in the Church of S.Vincenzo, containing the frescos of the Presbytery Chapel, commissioned by the Thiene family, and painted by a follower of Michelino da Besozzo; in Giovanni Badile there are another two pictorial works: Story of the life of S. Vincenzo and Adoration of the Shepherds.

In ZUGLIANO, in the church of S. Maria, we should mention the fresco from the early XV century, depicting the Madonna on the Throne with Infant Jesus and the Saints Chiara and Marta by a Veneto painter.

Near to Zugliano, in the outlying hamlet of Grumolo di Pedemonte, we find, in the church of di S. Maria Maddalena, the precious polyptych of S. Biagio, with its beautiful gold. In the Centrale hamlet, in the church of S. Clemente, an artist from the Veneto sphere, produced an interesting Crucifix (1442) in wood painted with tempera.

Another stopping point should cover the village of VELO D'ASTICO, Seghe hamlet, where, in the XV century church of S.Giorgio, we can admire an elegant Polyptych (1408) by a Verona painter of the XV century, to decorate the lunettes and Vault of the Chapel of S.Antonio of the Conti Velo nobles. The scenes reproduce the hagiographic episode which was most successful at the time, i.e. the one depicting S.George killing the dragon; the other episodes are: the Crucifixion; the Nativity, the Resurrection; Christ in the Sepulchre and Figures of the Evangelist.

We finish our tour, stopping in ARZIGNANO, an outlying hamlet of Castello, at the church of S. Maria ed Elisabetta, to admire the Altar piece sculpted by Nicolò and Antonini da Venezia, Madonna on the Throne with Infant Jesus (1425), and the well known Polyptych by an artist in the squarcionesco sphere, subdivided into 14 compartments arranged over two registers, with a magnificent frame in gilded and painted wood.