"THE LANDSCAPES OF PALLADIO" TOUR

The Landscapes of Palladio tour starts right in the heart of Vicenza, passing through the elegant streets of the centre towards the suggestive countryside of the Berici Hills.

As you leave the centre, take the Riviera Berica cycling path that begins near the Arco delle Scalette (“Arch of the little stairs”) and runs along the unused railway trail that once connected Vicenza to Noventa Vicentina. After a short stretch, nearing the Bacchiglione river, it is possible to see the Villa Capra Valmarana “la Rotonda”, one of the masterpieces of the architect Palladio. We recommend visiting the monument and subsequently enter the so-called Valletta del silenzio (“Silent Valley”), a rural paradise at the foothill of Mount Berico. After returning on the cycling path, the tour goes on until reaching Longara and then deviates to secondary roads, towards Fimon Lake. The route crosses several country districts and offers the chance to admire an ever-enchanting landscape until reaching Fimon Lake.
This is a lake basin of great naturalistic and archaeological interest, due to the remains of a prehistoric village found near its banks. The place is encircled by the Berici Hills, modest geographical features: formed at the bottom of an ancient sea in about a hundred million years, these hills rise above the floodplain over an area of 165 square kilometres. 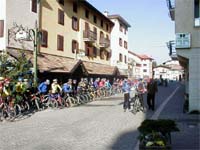 After cycling around the lake and the Fimon district, the itinerary goes on towards Arcugnano, at the end of which cyclists can enjoy the wondrous view on the Berici hills (to the east) and the Vicenza Pre-Alps (to the west). Less trained cyclists can avoid the climb by cycling along the foothill road that connects Fimon to Torri di Arcugnano, finally completing the tour of the valley.
At the end of the excursion, the route reaches Mount Berico. Past the Risorgimento and resistance Museum, the Sanctuary of St. Mary of Mount Berico can be found on the right, hosting exceptional works of art of religious and devotional interest.

In front of the Sanctuary lies Piazzale della Vittoria, a wide panoramic square from which it is possible to admire the city centre and the breath-taking landscape, including mountains, from the Small Dolomites in the Asiago Plateau to Mount Grappa: a clear invitation to continue the exploration of this territory.

The Veneto Ring tour (also known as "Anello del Veneto" in Italian) is a loop itinerary for bicycles around the province of Venice, Padua, Vicenza and Treviso that runs along the piedmont road, passing through the most beautiful cities of the region.

Starting from Venice, you can follow the cycling path on the islands of the lagoon to reach Chioggia (Venice). After visiting the city centre, the path continues along the banks of the Bacchiglione river, passing through Corti benedettine di Correzzola (Padua). At this point, you will have the chance to admire some of the most ancient thermal centres in Europe, the so-called Terme Euganee, from which it is possible to reach the centre of Padua in no time. Following the Bacchiglione through an enchanting landscape dotted with villas, you will arrive in Vicenza, UNESCO World Heritage: after a break in the historic centre, the next stops will be in Marostica and Bassano del Grappa, the former being renowned for its chess games, the latter for Ponte Vecchio, a bridge built by Palladio.

Nestled in the gentle hills, Asolo is part of the Italian association “I Borghi più belli d’Italia”. Maser is not too far away from there, where Villa Barbaro, designed by Palladio, is located and whose walls are decorated with frescoes by the famous painter Paolo Veronese. Passing by Montebelluna (Treviso) and mount Montello, you finally reach Treviso, last leg of our tour and capital of the ‘Radicchio rosso’. From there, taking advantage of the cycling path GiraSile that runs along the river of the same name, you will be back in the lagoon once again.

Here you can download the pdf on all the legs of the tour and the gpx file for the sat nav.

Tonezza is a real paradise for MTB, with its ideal territory that allows MTB enthusiasts to participate to several excursions along 12 different routes surrounded by nature, history, traditions and the authenticity of the suggestive mountain landscape.
Tonezza by mountain bike

Recoaro Terme offers a wide choice of routes for mountain biking suitable for everyone, beginners and experts alike. But there is more! Even DH fans have their own routes! More information and maps can be obtained at the Recoaro Tourist Office (hotline: 0445/75070)